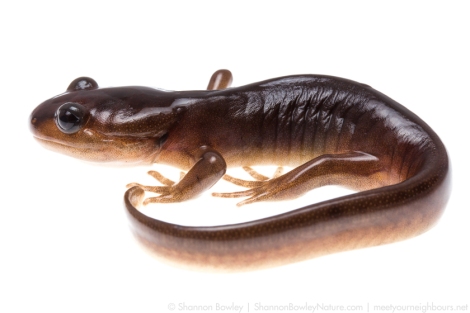 A magnificent beast of an amphibian makes its home here on the Olympic Peninsula, roaming the great forests and mossy expanses like a miniature Siberian Tiger. Admittedly they are fairly slow, somewhat slimy ones – well, it’s really nothing at all like a tiger, as it spends a great portion of its time lodged deep into the earth in a burrow. The common name for this genus is suitable, it’s one of the ‘Mole’ salamanders. Like a tiger and a mole, it is a predator – one quite capable of feasting on slugs, insects and arachnids. We have given it the scientific name Ambystoma gracile (Ambystoma – amblys (Greek) for blunt; -stoma (Greek) meaning mouth; or anabystoma (New Latin) meaning ‘to cram into the mouth’ – California Herps)

This creature had eluded me these 4 or so years, I’d never had the pleasure of encountering one even though they seem to be fairly common in the Port Angeles area. They are a native animal found here in the Pacific Northwest. Many years ago, James managed to take some wonderful photos of a large adult he’d found right outside the doorstep. I kept wondering when I would be so lucky!

I’ve been working on a ceramic version of this animal, faithfully recreating every bump and wrinkle of the salamander, studying all the imagery I could bring up in Google search for information on what it needed to look like. A week ago, on a very rainy night and on my way home from my ceramics class where I was continuing my work on my project, I asked James if he could drive around the neighborhood to look for Rana aurora (Northern Red-Legged Frog). I’d seen one before, but sadly it was completely flattened and leather hard from exposure to the intense summer heat – looking more like frog jerky than a remarkable amphibian. I had a feeling our chances would be good in that area.

The road was dark and rain glistened silver and gold as it fell through his vehicle headlights. Every so often we would watch a pale blob leaping across the concrete in a bit of a panic, sometimes in pairs or more – all of them Pacific Tree Frogs. We neared the end of our route and James, with his almost impossibly keen eyes, spotted something unusual sitting on the road. He recognized it as a salamander right away. He brought it to me, knowing I’d be pleasantly surprised. My eyes absorbed every curve and color. It was absolutely different! Facinating!

It was small, but large for a salamander. Kind of chunky, even. Its head looked unlike those of other species, those being sort of slender, like that of Ensatina. I looked at it more closely, moving my light across the surface of its skin to bring out hidden details and was fascinated by a number of small, rounded dark blotches, darker than the overall color of its skin, which under a flashlight was a bronzy color. These spots were a duller, dark brown. It had funny looking eyes, too. Behind those, we could see fairly pronounced parotoid glands, meaning it had to be a juvenile Northwestern Salamander – my fabled Ambystoma gracile! We amused ourselves with the idea that my nearly completed ceramic version was acting as some sort of totem, summoning the salamander into our presence! Reality was quite different, it was just an amazing night for amphibians; we found newts and other salamanders within the next few days, and were treated to the croaking of happy tree frogs, a call that is abrupt, frequent and loud. Fall is a magical time for these guys!

Anyhow, I was quick to photograph the salamander, a convenient subject for the Meet Your Neighbours Biodiversity Project, a project that I am now proud to call myself a part of (although still working to create a good portfolio for)

Our little friend from the front.

Yesterday was the day I’d see my ceramic version in its final, glazed state – ready to bring home after several weeks of tinkering. I’ll share that process with you now, a series of photos I took with my cellphone:

First day, most of the essentials tossed onto a hollow form. 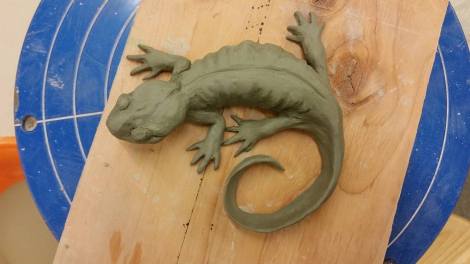 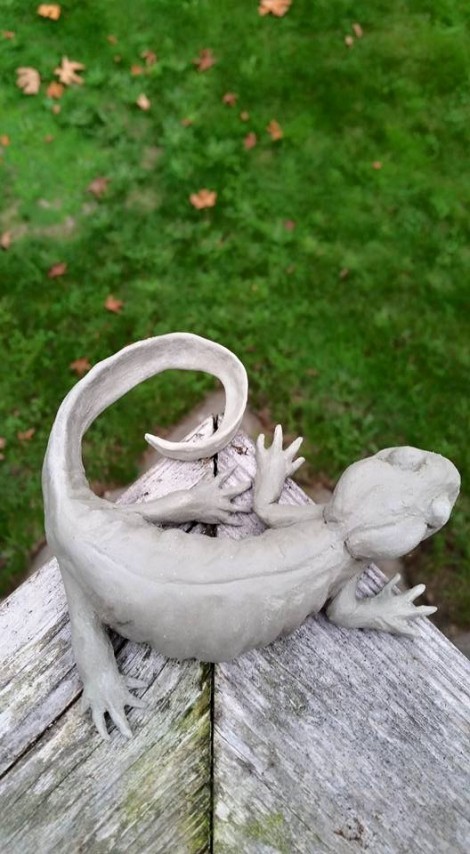 Brought him home to continue adding and refining details. 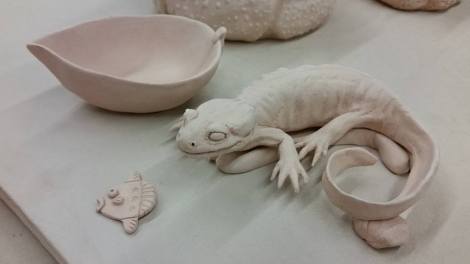 Fresh out of the bisque fire!

Coated in glaze, waiting for the last fire. I was terrified he’d come out looking like a clown! 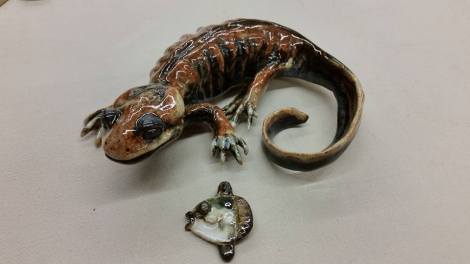 Finished! Also showing is a small Mola mola pendant, a necklace I finished last night. I’ll share that one soon in another post.

My biggest concern came near the end – and there are some things I wish I had done differently, but learned a great deal from.  Stains are just that, and they hold true. I could have used much less! I recognized the white glaze doesn’t bleed and blend as much as the other colors as well, which worked well in some areas, and not so well in others. I know that if I tried this again, I’d have a better result – but I think I wasn’t too far off the mark. 🙂

There you have it! The creation and discovery of a local inhabitant. If you’d like a ceramic animal of your own, please feel free to contact me! If you’d like to keep up to date on every post, don’t hesitate to join in on the adventures and subscribe – it’s the blue button on the right side of my page (up there, if you’re down here) 😀 There will be plenty more to come, including reviews on camera equipment and lenses, other art projects and encounters with local wildlife.

Escaping the intense summer heat, this adorable Golden-mantled Ground Squirrel (Spermophilus lateralis) sprawls and stretches in a patch of refreshing shade. Summers in our area are pretty intense, I much prefer spring! Can't wait! #GoldenMantledGroundSquirrel #SpermophilusLateralis #GroundSquirrel #Squirrel #SummerSun #Memories #Nature #Wildlife
Lycosa erythrognatha, a beautiful male wolf spider of fair size. They are always a treat to find wandering through the undergrowth, typically easy to find during the night via eyeshine. I'd forgotten to share a bunch of Ecuador photos taken during our honeymoon trip a few months ago! I will post more here, soon. #Lycosa #LycosaErythrognatha #WolfSpider #Arachnid #Spider #LoveForTheUnloved #Neotropical #CloudForest #Arthropod #Portrait #Macro #MacroPhotography #UpClose #Canon #Canon80D
Refuge in the grip of winter. So glad to be out of the sea of white, finally. I'm sure the animals that made it through are even happier to see the green again. #Winter #Snow #Cold #Seasons #Quail #Birds #Refuge #Fluffy #Nature #Trees
James and I spent the day with Nancy of @sci.bugs and @bernardourea, talking entomology, going over some cool books she had brought with her and hiking around the forest reserve of @elseptimoparaiso here in Mindo, Ecuador. We found a variety of beetles, weevils, spiders, katydids and even a Aperostoma quitensis, a very cool snail I've only seen once before! Very fun day, it isn't often we get to hang out with other people that are passionate about bugs, especially a proper entomologist. I learned a lot in just a few hours. #Entomologist #Books #Science #GeekingOut #NatureNerds #Nature #Bugs #Moths #Beetles #Weevil #Katydid #Biology #Biodiversity #Neotropics #CloudForest #Hiking #Explore #Ecuador #ElSeptimoParaiso #SeptimoParaiso
Dendrosophus carnifex, a tree frog that is frequently seen near bodies of water. Pretty common, but always cute. I think this is a female. In situ, although she hunched and flattened herself once I inched closer. She is also perched on one of the large bromeliads on the ground. They seem to flourish even in disturbed habitats, utilizing manmade pools and ponds, so threats to their existence don't seem to be a major issue, th as thankfully! #DendrosophusCarnifex #Dendrosophus #TreeFrog #Frog #Amphibian #Ecuador #NeoTropics #CloudForest #Biodiversity #Herpetology #Macro #MacroPhotography
One of my favorite spiders here in the cloud forest - a male Cupiennius, a type of wandering spider frequently encountered at night, when they are perched on broad leaves. They will pounce of insects or other spiders and consume them. Unlike some Phoneutria spiders, the venom of Cupiennius is not a big deal for a human, the effects are like the sting of a bee. I'd know, as I was accidentally bitten by a female when I touched a leaf she was sprawled out on. She thought I was some kind of prey item and latched on to the side of my hand for a few seconds. I swear once she realized I was something WAY bigger than she had planned on biting, she flipped out. I remember her suddenly letting go of me and dropping to the grass, flailing around like crazy before hopping away in a hurry! 🤣 I've got a lot of catching up to do here! The past two weeks saw me laying in bed after a tooth infection, which led to the removal of all my wisdom teeth. We are extending our trip in Ecuador to make up for lost time. #Cupiennius #WanderingSpider #MaleSpider #Spider #Arachnid #Macro #MacroPhotography #CloudForest #Nature #LoveForTheUnloved #Ecuador
%d bloggers like this: