It’s been a little more than a week since James and I left the wondrous valleys of Mindo, Ecuador, but it feels like forever ago on an especially dreary day here in Washington State. There is a thick blanket of blue-grey clouds from horizon to horizon and rain is falling in an oppressive and severely depressing mist. I’m in something of a cave, as the walls of my room are made from 50’s era cinder-block. It doesn’t do much good for keeping the cold outside and the heat inside, where it ought to belong. Frigid weather is not all bad and I do intend to get out into the scenery because it can be quite beautiful. It is inevitable that the cycle of life continues here! Dying leaves add a brilliant, peppy splash of color, so it’s a great time for exploring the temperamental, constantly evolving Fall atmosphere.

Mindo in late July on the other hand, was fairly dry when we first arrived. 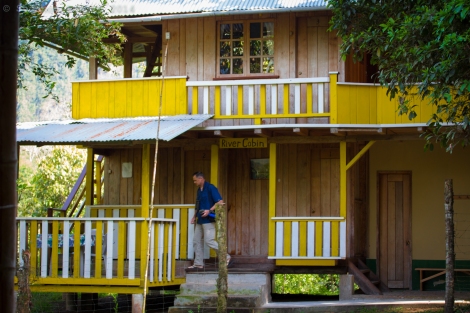 James at The River House.

We spent a few days at The Yellow House (Home away from home for James and I!) and ended up staying a little longer than anticipated. This was due to the fact that I had my first real run-in with food poisoning, which I’ll describe in another post (Hopefully to the benefit of other Mindo explorers!). James fell victim to the shenanigans of foodborne illnesses the very day I had recovered from mine, meaning further delay of our arrival at Septimo Paraiso, where we planned to spend the majority of our time in country working on projects for the lodge.

When we finally descended upon Septimo, we were more than eager to get started on walking the extensive trails of the fantastic forest reserves. Because it had been so dry in the preceding months, finding photo subjects required a bit more walking and work than usual. The difficulty was exaggerated by the fact that we were becoming acquainted with an entirely new stretch of forest. James knows the forest at The Yellow house quite intimately and I have also become very familiar with it, so we usually know where to expect certain life-forms. Neither of us had explored the forest at Septimo before, but it is well worth the while! Unseen creatures lay in wait and many exciting and perplexing subjects appeared almost randomly. 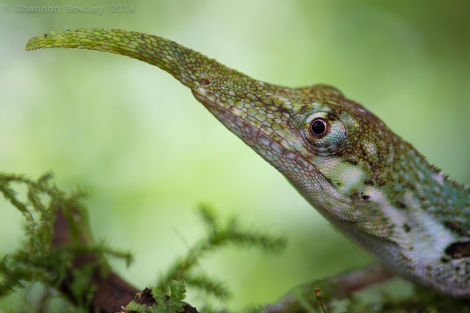 We were treated to many individuals of the Horned Anole (Anolis proboscis) and we encountered a dizzying diversity of caterpillars, moths and butterflies. Abruptly, although a bit predictably, the weather changed its tune in October. Days would start optimistically – the sun shining out energetically after burning off the morning mist that greedily clings to the hillsides. Soon after, a forceful downdraft would come sweeping in, hushing bird calls in its wake. Eerily, the surrounding forests dimmed and not long after, rain would fall in heaving, roaring sheets. This was usually opened by violent bouts of thunder that sounded to me like angered leviathans of mythical and ancient times. It was easy to imagine them battling just out of sight, above the rain and clouds. Those sounds were strange, made that much weirder by the terrain. The downpour initiated a bit of magic, too. Undoing months of baking, the parched soil greedily soaked up the additional water and dried out vegetation would rapidly perk up. The deceptively motionless plants would slowly start to move and we were witness to this from day to day – uncurling tendrils from pods, roots probing about, vegetation fanning out and reaching for new heights! Frogs love rain and sometimes their mating calls were nearly overwhelming. There is a particular species of Pristimantis that can give you a good scare when it calls  –  it is almost unbelievably loud and it rings with startling clarity if you are standing anywhere near it. Like frogs, I also love thunderstorms, but stormy weather isn’t so great for the photography side of things. The good, bad weather was frequent…so we did a lot of indoor shooting on such days, making use of a lightbox for macro subjects.

We met a great number of equally amazing people while there. Some of them were familiar faces that James has known for some time, from past visits to Mindo, and many others were new.

Nature lovers, biologists, photographers and people committed to realizing their varied dreams are simply incredible. I always feel lucky to be surrounded by inspired and deeply passionate people. There are challenges of course, but it is amazing to me that I am even able to bear witness to what is possible in a place like Mindo. As a result of all that, visions become solidified. James and I have some big plans for the coming year that will be a joy to share with everyone in the coming months! 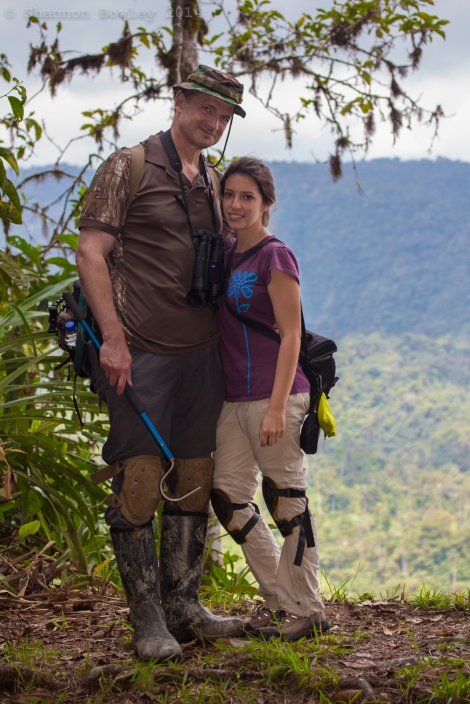 Enjoying the lookout from Toucan Trail, relaxing for a short while during a macro photography hike at Septimo Paraiso.

There is a lot left for us to do, but it will be fun work! Updates to the websites for example, my exploration of ceramics and long overdue investments for me on the technical side of the photography processes. It’s time to make it all happen! 😀