As a consequence of the Seattle Times spider article and the mere click of a button on Facebook, James became a most unusual and fascinating part of my life on the 2nd of September, 2010.

The article had already been published for a few days and I had decided at that point to welcome new people into my life, random folks who shared an interest in spiders and nature, specifically.

Although wary, she was supportive and arranged a list of things we’d need to do to be sure I’d be safe. At this point, I’d refused to meet James in person, so she was understandably concerned. In her protective maternal mind, he was more likely some crazy killer guy than a proper gentleman! I vouched for James here, mentioning how nicely he’d handled some rather upsetting news in the past. That wasn’t enough, and she’d only be satisfied by other means. After some investigating of her own, she was satisfied.
We’d have to meet James in person. It was finally going to happen.
We arranged for him to come to our place on the 15th of January, to chat and eat. I was fantastically anxious. There was aspects about James that I didn’t really know, little details that come only with having seen a person in the flesh and blood. I remember my Mom and I wondering how tall he was. I had no idea, but we thought he’d be on the shorter side. I also didn’t know what sort of vehicle he drove…but I entertained myself by imagining him driving something rugged, like a Jeep. I didn’t know what he sounded like, either.
That mystery was soon solved when James called my house to ask for directions to our home.
The problem with this is that I don’t even know how to give directions on account of the fact that I don’t drive. I’ve already mentioned that I am not the most social of creatures, so no one comes to pick me up, either.
Anyways, I answered the phone, expecting to hear an older, sort of nasal (Because, of course, extremely intelligent people should automatically sound like social outcasts 😉 ) formal voice (formal because James writes that way!) but was surprised…
In fact, James’s voice was pleasantly deep, full of unique energy, with traces of benign strength and a fluid sense of humor. A handsome voice – that instantly changed a good chunk of my mental image of him. And, it was a boon to my overall confidence.
I suppose it’s a bit weird, making judgments like that in only a few seconds, but I believe that a voice says a lot about a person and that it can quickly convey a lot about an individual’s personality and tendencies.
I must have stuttered out some nonsense about being useless with directions, and when my sister figured out what was going on, she insisted on taking over for me. I was relieved and more than happily gave her the phone. She set him on the correct path..
Not long after, an evergreen colored vehicle pulled up to our house. It was close to what I’d imagined. I didn’t see James in the process of getting out of his car when I went to answer the door, so his appearance was still a surprise until I opened it for him. I’d been wrong about a lot, and again, had to make adjustments to the mental picture because there was James – flesh and blood!
Standing before him, I felt exceedingly short. James was fairly tall. Not only was he tall, but he looked reasonably prepared for the out-doors. I have a vague recollection of what he was wearing. There was plenty of khaki colored this and that, with pockets all about and shoes that looked durable. Funny, I hadn’t given it much thought – what his clothes would say about him and how important that really was! I was very much relieved to see he wasn’t in jeans and sneakers and a T-shirt…I’m certain that it wouldn’t have inspired much confidence in my family or myself.
Again, it was the subtle stuff that painted the picture and roused my ever-deepening curiosity. Aside from towering over everyone and everything in my house and certainly looking the part of someone I’d be hiking into the foresty unknown with, he moved differently than other men I’d met throughout my life. James exuded an air of ruggedness, a type of sophistication unfamiliar to me or my family. I’m not sure if he was tense, although I’m sure to a degree he must have been, but there was a certain rigidity to his posture – I suppose ‘disciplined’ is a way to describe it. When he sat, he wasn’t slouched all over the place – he was respectful. And, he looked quite happy. In the first few minutes I’d seen him, I’d been a bit intimidated. How would we get on face to face? I was reminded of the cavernous differences in life experiences between us. Once we started to talk, though, that unbalanced feeling began to melt away. 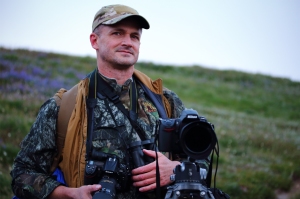 Not long into the meeting, we all packed into my Mom’s car and headed to a familiar Chinese restaurant to settle down, to get to know him and to discuss his plans. This part consisted of me sitting across the table being typically shy, observing my sister Kimberly as she began interrogating James on specific aspects of the trip – security type questions, which I thought he answered quite eloquently. I kept expecting James to do something that would cross that ‘professional’ line, because of how he said he’d felt about me previously, but it never happened. I was quite satisfied with that.
My family seemed to relax and I could tell that he was making a good impression. In regards to his unique personality, I remember my mom saying he reminded her of “A British person.” I knew what she meant, and it really was tricky…he didn’t fit any familiar types and right away he proved to be exceptionally cultured! He elaborated on his life experiences and revealed that he’d been a soldier. It put a lot of his behavior in context, thinking about it. I have a long and thriving admiration for military men, a deep respect for soldiers, so, this was only a super good thing in my book. I’d never met anyone like him.
I can’t recall everything about that first visit – I don’t remember how long James stayed, but I think we spoke one on one for at least a few hours. Not being a terrifically social person, I wasn’t used to having extended conversations and I actually had a difficult time responding coherently at times, as my mouth kept going dry from talking and my energy level was plummeting fast. Interacting with other humans was exhausting! Those few hours, in the end, proved to be some of the most engaging and remarkable conversation I’d had in many years.
And James was really funny. He was charming when he spoke, and there was no doubting the sincerity of his smile and laugh. It was curious, the way his eyes lit up when he’d recount a particularly interesting story, and I deeply enjoyed hearing him tell it. He seemed so alive! That energy was infectious and the more he told me about this and that, the more excited I became about the whole adventure. I found that his personality was swiftly wearing down the walls of my paranoia and that he was gaining my trust with alarming rapidity.
He left as it became late in the day. It was his first of two visits to my home before he headed off for Ecuador alone. I learned a bit more about him with that visit because there were other people at my house, and they asked him a variety of questions – LDS Missionaries and my Mom’s friend Dave, who I’d asked to come to see what his impression of James would be (for extra reassurance purposes.)
I learned from that visit that James had little interest in sports, was unfamiliar with much of popular culture (but was a wealth of knowledge in other respects!) and wasn’t terribly keen on small talk among big groups. But he was still funny, superbly sweet in a subdued sort of manner and continued to cultivate a robust amount of confidence in him from me. We were no longer strangers, or merely friends who’d never met…
It was true, I was going to spend 3 weeks in the forest with him, in a faraway land!
But the real adventure was yet to come…

'Nocturne, 1' The latest paper mâché item, painted in acrylics, for sale for $45 + shipping. PayPal only. I want to buy another tree (several in the future!) to plant on our property and selling this will do it! This is the first of a series on nocturnal animals I'll be depicting in this way. #Wolf #Lobo #Moon #Luna #WolfMoon #WolfArt #WolfSculpture #Nocturnal #Nocturne #GreyWolf #GrayWolf #CanisLupus #BlackWolf #Canine #Carnivore #Nature #Wildlife #WolfArt #WildlifeArt #WildLifeArtist #NatureArt #PaperMache #Sculpture #Acrylics #LoveForTheUnloved
An American Bullfrog, strangely tolerant of my curiosity. Considering how widespread and numerous these invasives are, this is the best look at one I've ever had. They usually swim or jump away before I even notice them! #AmericanBullfrog #Frog #BigFrog #Froggies #PondLife #Invasive #Herp #Herping #🐸 #Nature #Wildlife
Escaping the intense summer heat, this adorable Golden-mantled Ground Squirrel (Spermophilus lateralis) sprawls and stretches in a patch of refreshing shade. Summers in our area are pretty intense, I much prefer spring! Can't wait! #GoldenMantledGroundSquirrel #SpermophilusLateralis #GroundSquirrel #Squirrel #SummerSun #Memories #Nature #Wildlife
Lycosa erythrognatha, a beautiful male wolf spider of fair size. They are always a treat to find wandering through the undergrowth, typically easy to find during the night via eyeshine. I'd forgotten to share a bunch of Ecuador photos taken during our honeymoon trip a few months ago! I will post more here, soon. #Lycosa #LycosaErythrognatha #WolfSpider #Arachnid #Spider #LoveForTheUnloved #Neotropical #CloudForest #Arthropod #Portrait #Macro #MacroPhotography #UpClose #Canon #Canon80D
Refuge in the grip of winter. So glad to be out of the sea of white, finally. I'm sure the animals that made it through are even happier to see the green again. #Winter #Snow #Cold #Seasons #Quail #Birds #Refuge #Fluffy #Nature #Trees
James and I spent the day with Nancy of @sci.bugs and @bernardourea, talking entomology, going over some cool books she had brought with her and hiking around the forest reserve of @elseptimoparaiso here in Mindo, Ecuador. We found a variety of beetles, weevils, spiders, katydids and even a Aperostoma quitensis, a very cool snail I've only seen once before! Very fun day, it isn't often we get to hang out with other people that are passionate about bugs, especially a proper entomologist. I learned a lot in just a few hours. #Entomologist #Books #Science #GeekingOut #NatureNerds #Nature #Bugs #Moths #Beetles #Weevil #Katydid #Biology #Biodiversity #Neotropics #CloudForest #Hiking #Explore #Ecuador #ElSeptimoParaiso #SeptimoParaiso
%d bloggers like this: